Home » blog » architecture » A heater for the underfloor heating

Today it was finally possible to try our underfloor heating system, because we got an electrical heating boiler attached.

It was a long process to figure out which kind of heating device we will use, also due to our economics. So we decided actually to get a heat pump. But the information if a puffer tank is needed or not were very different all over the internet, and than the plumber of our choice made the decision. He did not want to  install a heat pump without a puffer tank.

Since the establishment of a puffer tank would have spoiled our budget for the heating device this year, we decided to install an electrical heating boiler instead. Of course this heater is quit expensive in the usage. But in a year or two we can integrate a heat pump in the return line, and than the electrical heater will take over the function as a puffer tank.

Furthermore a puffer tank would also have needed a lot of space, and we were not sure, were we would have installed it, the heating boiler is rather small and can later be hidden behind our kitchen furniture. 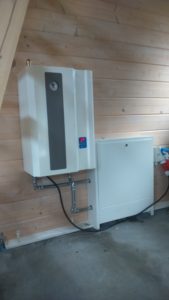 We have 3 different heating circuits in our mini house. One is underneath the terrace. This circuit will first be activated, after we closed up the roof and the sides for the terrace, which will be in a year or two. 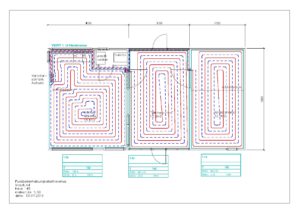 Our heating pipes got filled up with antifreeze. So in the case when we don’t use the house in the winter, the pipes wont get damaged. 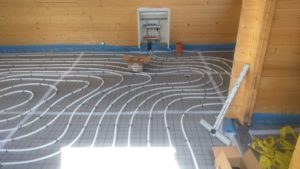